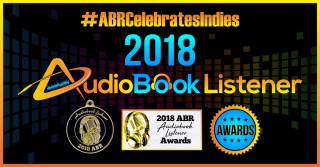 Hey, I’ve been nominated for multiple audiobook awards this year. I’m very pleased to get the acknowledgement for my work and am so proud of the material done by my narrators. Thank you so very much.

PLEASE VOTE FOR ME IN THESE CATEGORIES:

HORROR – THE TOWER OF ZHAAL

It has been a year since John Henry Booth’s exile from New America and the fall of the Black Cathedral. Cursed with a slow transformation into a monster, he has begun a doomed relationship with fellow escapee Mercury Halsey as they seek some way to arrest his transformation.

Dubious hope arrives in the form of the University, the deranged scientists and cultists descended from the staff of Miskatonic University. Except, their offer of help comes at a price. Having sold themselves to ancient aliens called the Yith, they wish John and Mercury to join a group of rogues in hunting down a wayward member of their faculty: a man who intends to release the last of the sleeping Great Old Ones on an already ravaged planet. If they’re telling the truth, John and Mercury will be heroes. If.

The Tower of Zhaal is the second novel of the Cthulhu Armageddon series, a post-apocalypse continuation of H.P. Lovecraft’s popular Cthulhu Mythos.

HUMOR – THE SCIENCE OF SUPERVILLAINY

Gary Karkofsky a.k.a Merciless: The Supervillain without Mercy™ returns in the fourth volume of the popular Supervillainy Saga. Having discovered the world’s greatest superhero slain by his doppelganger from another reality, Merciful: The Supervillain with Mercy™, and the arrogant President Omega, Gary dedicates himself to overthrowing both.

Unfortunately, this is harder than it looks since Merciful has all of Gary’s genre savviness while President Omega has the entire brainwashed United States military behind him. In the end, though, there can be only one ruler of the world and two of these three feuding villains will have to go.

Peter Stone is a poor black vampire who is wondering where his nightclub, mansion, and sports car is. Instead, he is working a minimum wage job during the night shift as being a vampire isn’t all that impressive in a world where they’ve come out to mortals.

Exiled from the rich and powerful undead in New Detroit, he is forced to go back when someone dumps a newly-transformed vampire in the bathroom of his gas station’s store. This gets him fangs-deep in a plot of vampire hunters, supernatural revolutionaries, and a millennium-old French knight determined to wipe out the supernatural. Sometimes, it just doesn’t pay to get out of the coffin.

“Black Technology has made murder a billion dollar industry.”

The International Refugee Society has twenty-six cybernetically enhanced “Letters,” and for the right price, they’ll eliminate anyone. They’ve given up their families and their memories for ten years of service with the promise of a life of luxury awaiting them.

Agent G is one of these “Letters,” but clues to his past are starting to emerge while he’s on a dangerous mission to infiltrate the Society’s most dangerous competitor. In the midst of all the violence, subterfuge, and deceit, he’ll need to keep his wits about him and trust sparingly. After all if an organization will kill for money, what would they do to keep the truth hidden?

Cassius Mass was the greatest star pilot of the Crius Archduchy. He fought fiercely for his cause, only to watch his nation fall to the Interstellar Commonwealth. It was only after that he realized the side he’d been fighting for was the wrong one. Now a semi-functional navigator on an interstellar freight hauler, he tries to hide who he was and escape his past. Unfortunately, some things refuse to stay buried and he ends up conscripted by the very people who destroyed his homeland.

LUCIFER’S STAR is the first novel of the Lucifer’s Star series, a dark science fiction space opera set in a world of aliens, war, politics, and slavery.

Progress on my books is going well with the Tournament of Supervillainy almost done. I’m extra pleased to be able to share this sketch of its guest stars with you. The Tournament of Supervillainy is a “Crisis on Infinite Earths”-esque crossover of my worlds and here’s pictures of Jane Doe (I was a Teenage Weredeer) and Cassius Mass (Lucifer’s Star).

The Nerd Book Review has done a podcast interview with me. We got to discuss everything from LUCIFER’S STAR to I WAS A TEENAGE WEREDEER to the trials and perils of indie publishing. I hope everyone will check it out.

I finished I WAS A TEENAGE WEREDEER this week and I’m very glad to have yet another book coming for my wonderful fanclub. It’s 83K words long and will be followed by a sequel novel called AN AMERICAN WEREDEER IN MICHIGAN.

What are my next projects as I work on these? I will be finishing up LUCIFER’S NEBULA and 100 MILES AND VAMPIN’ which are the sequels to LUCIFER’S STAR and STRAIGHT OUTTA FANGTON. Both of those books are 2/3rds of the way done.

Alex Raspad, cover artist for LUCIFER’S STAR, WRAITH KNIGHT, and I WAS A TEENAGED WEREDEER was cool enough to do a picture up of my favorite character from LS (aside from Cassius). Here’s a picture of Clarice Rin-O’Harra. 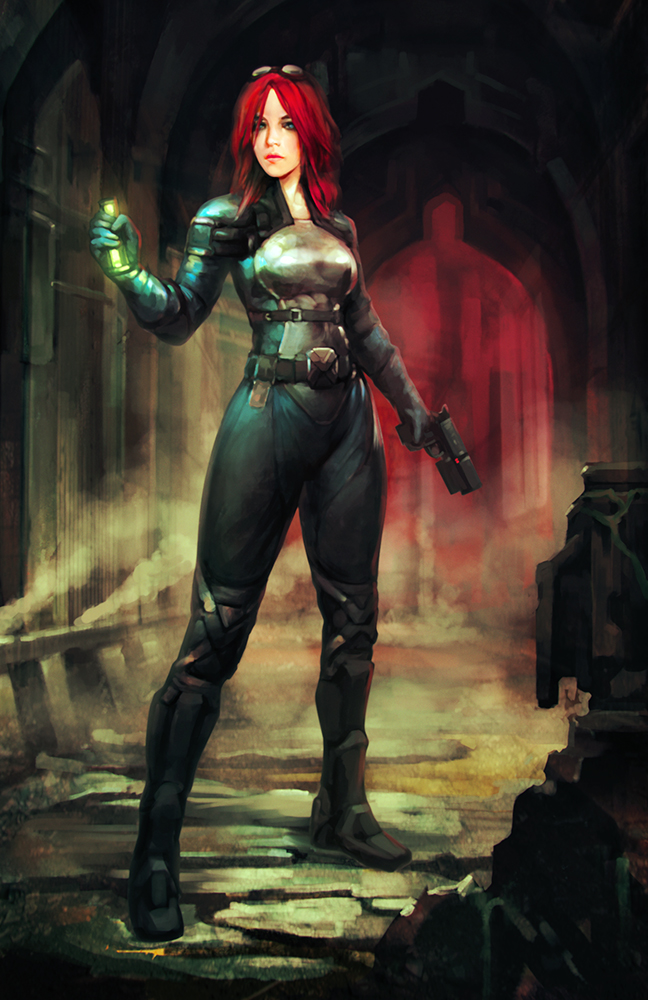 You can purchase Lucifer’s Star here

I’ve got great news, folks! Alex Raspad, who is an amazing artist, has done a third cover for my LUCIFER’S STAR series. Here’s a depiction of the third book in the series that I’ve already got plotted out and hope to finish soon for release in early 2018. 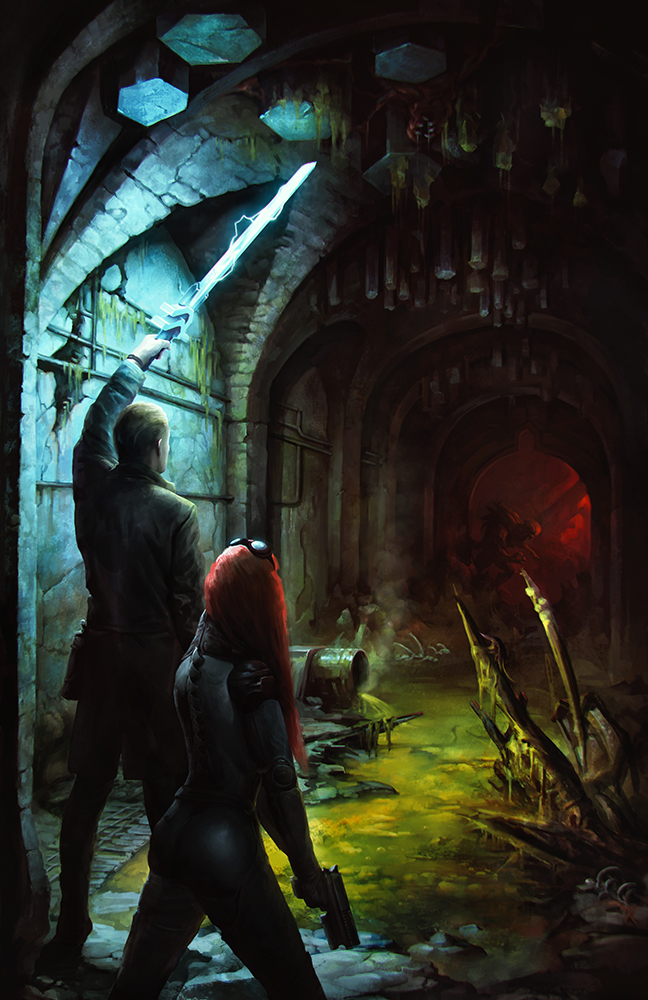 A heads’ up on where I’m related to on my various projects:

THE KINGDOM OF SUPERVILLAINY: I am at 22K writing this, which is a lot more impressive than it sounds as I haven’t “officially” started writing it. I planned to start writing it after I finished Lucifer’s Nebula but I keep writing a little bit more here and there as the jokes and plot come to me. It’s poor Gary enjoying the height of his success as a supervillain only to discover that comes with the cost of the heroes in retreat. Can he live in a world dominated by evil or will he decide he has to give the heroes a little push? I expect it to finish around 70K.

LUCIFER’S NEBULA: The sequel to Lucifer’s Star is 55K now and should be about 90K when done. The story will pick up a year after the events of the first book as Cassius finds its impossible to escape his past, no matter how far he runs. He must confront his doppelganger and wayward family, who are presently the heads of the galaxy’s ever-successful rebellion. But there’s a darker hand behind the Spiral’s civil war and if humanity doesn’t unite then it may simply join the legion of other extinct races across the universe. Cassius woudl rather just engage in some not-so-good-natured smuggling.

100 MILES AND VAMPIN’: The sequel Peter Stone’s original adventure. 100 Miles and Vampin’ picks up with him being in a slightly-better but still pretty poor place in the vampire hierarchy. In this case, he’s assigned to look after the equivalent of Stephanie Meyers and immediately botches the job when she’s killed by an unknown assailant. Forced to solve the murder before he’s thrown up as a sacrifice to the masses, Peter needs to decide if success among the undead is worth it. I’m about 50K into this out of 70K so another almost done volume.

WRAITH LORD: It’s taken just about forever to get my books right back for both Wraith Knight and the Red Room series. However, I have successfully done so. If you were interested in the my take on Tolkien-esque fiction then you might enjoy the fact I have a second volume coming out as soon as the cover is finished. Alex Raspad is working on it now. Jacob has consolidated his rule over the Formori and other “evil” races but does he really want to begin war with the “light” species? It turns out he doesn’t have much of a choice as they have begun their own invasion.

AGENT G: SABOTEUR: The sequel to Agent G: Infiltrator, we pick up with G now working for the United States government to hunt down his former comrades. Kept on a leash by the fact they have an offer to fix his condition before he dies in a few years (if he has that long), he’s less than happy with being one of the “good” guys. It gets worse when he realizes what he found out was true of his past was just the tip of the ice berg. It’ll be released as soon as I can get approval for it from Amber Cove.

ELDRITCH OPS: The sequel to ESOTERRORISM is ready to go and should be coming out in a few months. I just want to get the book in a place where I’m not competing with myself. In this case, Derek is bored out of his skull as a member of the Committee and wishes he hadn’t given up his field agent status. Stupidly agreeing to investigate a diplomatic incident between the Red Room and the Vampire Nation, he ends up getting himself in the crosshairs of forces which want a war between the two powers. Oh and Dracula, himself, has decided to become involved.

As for upcoming projects? I have plans on continuing the SUPERVILLAINY SAGA with not only Kingdom but an upcoming crossover book called WORLDS OF SUPERVILLAINY which will visit the universe of LUCIFER’S STAR and CTHULHU ARMAGEDDON. I also intend to continue both the LUCIFER’S STAR universe as a series while the majority of the others listed here will be capped off as trilogies. CTHULHU ARMAGEDDON is a special case as it was meant to be a stand-alone but I’m working on a third book and may have more as ideas come to me.

I’m also sketching out a collaboration with DAWN CHAPMAN for a Lit-RPG science fiction novel.

My current progress on multiple manuscripts: 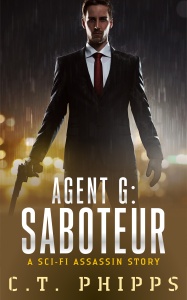 The Tree of Azathoth (Cthulhu Armageddon 3#): 17,000 Words (90K estimated word count at completion). This is a low priority at present because I want this one to be perfect but it is still in the works.

Wraith Lord (Wraith Knight 2#): Completed and submitted to Crossroad Press but held up by *grumble grumble* issues. No cover.

I have a few other irons in the fire as well with a YA sci-fi novel and a upcoming Lit-RPG space opera.

Beauty in Ruins: #SciFi Review: Lucifer’s Star by C.T. Phipps: As opening scenes go, sci-fi doesn’t get much better than this! Lucifer’s Star kicks off with a big, high-stakes, fast-paced battle t…

I’m tremendously pleased to announce the release of LUCIFER’S STAR, my dark space opera, on audiobook. Eric Burns (The Dragon Circle Trilogy) has done an amazing job bringing my story to life and I hope you’ll check it out. I’ve heard the book described as an “R-rated Star Wars” and “what happens when the TIE pilots and stormtroopers find out they’re the bad guys.” For me, it’s a deconstruction of the more romanticized view of war and its consequences in many military sci-fi stories while keeping all the pew-pew as well as romance.

Cassius Mass was the greatest star pilot of the Crius Archduchy. He fought fiercely for his cause, only to watch his nation fall to the Interstellar Commonwealth. It was only after that he realized the side he’d been fighting for was the wrong one. Now a semi-functional navigator on an interstellar freight hauler, he tries to hide who he was and escape his past. Unfortunately, some things refuse to stay buried and he ends up conscripted by the very people who destroyed his homeland.

LUCIFER’S STAR is the first novel of the Lucifer’s Star series, a dark science fiction space opera set in a world of aliens, war, politics, and slavery.