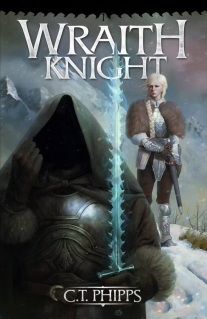 I’ve had an extraordinarily busy year and a lot of you may be overwhelmed with my output. Others, God bless you, just may want to know when the next book is coming out. I’m pleased to say we’ve got plenty of new material in the pipeline with some of the biggest being works I announced toward the beginning of the year.

Wraith Knight is the story of a Ringwraith-like entity who finds himself suddenly blessed with free-will following the destruction of the Dark Lord. Allying with a young and extremely misguided heroine, he decides to see just how much the heroes have screwed up the world past the last war of light and darkness. It is the first volume of the Three Worlds Trilogy which I think of as one of my best works. It’s also going to be available on November 15th, 2016!

Eldritch Ops. is the second book of the Secret Files of the Red Room trilogy which follows the adventures of Derek Hawthorne and his partner Shannon. Having found himself as one of the all-powerful Committee, Derek chafes at his new desk job and wants one more case to make himself feel relevant. Unfortunately, when his now-vampirized ex-partner Christopher comes to him for help, he discovers he’s now neck-deep in a conflict that may result in war between humans and vampires. A conflict humanity might not win. Guest-starring Dracula. It’s going to be available April 1st, 2017 and that’s no April Fools.

But there’s something even better about these two books. They’re going to be available in brick and mortar stores! Available to order in physical form wherever paper books are sold! Yes, I’m losing my indie cred rapidly!