When you’re commissioning new art for your books, it’s sometimes better to buy in bulk or you can potentially get caught with your pants down. The artist for The Bright Falls Mysteries, Lucifer’s Star, and Wraith Knight (Alex Raspad) has retired for instance. Thankfully, at least Lucifer’s Star has all of its covers taken care of!

I thought I’d share some of my upcoming works’ art, though, which gives you something of a sense of what’s in the pipeline.

I’ve finished the manuscripts for AGENT G: SABOTEUR and AGENT G: ASSASSIN which will be coming out this December and hopefully this February. Audiobooks are planned for both with Jeffrey Kafer. As you can see by the art, though, I have at least two more books planned for this series and possibly more.

Agent G is the story of a sci-fi cyberpunk assassin who had his memory wiped by his employers. A cyborg hitman, he’s developed far more free will than they’re comfortable with. What happens next? Well, you’ll have to read to find out. Will all five books be available at the end of 2018? I certainly hope so!

This is a collaboration of mine and only the first book is to be expected late 2018 (so the other two are being posted prematurely) but I’m excited for a spin-off series from my AGENT G books, set twenty years after the first of them. The Cyberpunk Wars follows Colleen Patrick and her Runner associates as they deal with the corporate warfare which dominates the devastated technologically advanced but war-torn 2040s. These will be written with my favorite collaborator Michael Suttkus (Lucifer’s Star and The Bright Falls Mysteries)!

ESOTERRORISM was the first book I ever published but it was delayed for over two years due to company politics then got caught up in a kerfuffle that forced me to move onto other projects. Now, thankfully, the series is in the hands of Amber Cove publishing and it’ll be possible to release the sequel.

Eldritch Ops. picks up a year after Derek Hawthorne has found himself as one of the most powerful men in the House. Unfortunately, his position means he has to stomach daily corruption and evil to keep the organization’s power intact. After intervening one too many times to the right thing, he’s sent on an impossible task: to make peace with the Vampire Nation. Instead, he finds out he may be the powder keg that starts a war to save humanity. 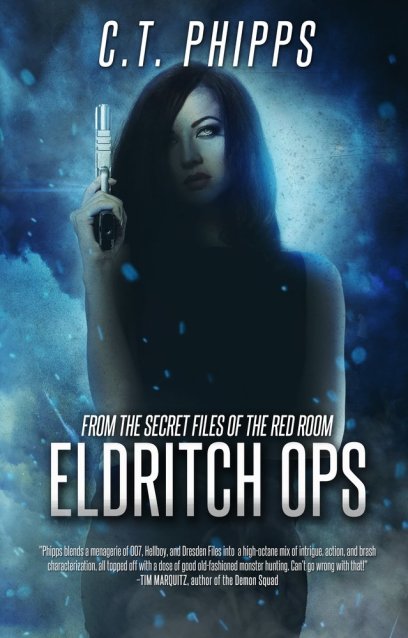 The long awaited sequel to LUCIFER’S STAR will be available this Winter and is almost ready now. I’m particularly proud of this one as Cassius Mass is one of my all-time favorite creations. This novel picks up a year into the Insurgency led by his clone and Cassius’ misguided attempts to stay out of the war finally backfiring.

The Tournament of Supervillainy

THE TOURNAMENT OF SUPERVILLAINY is the 5th volume of the series and a novel which will be subject to a retool as it’s going to be twice the size of previous volumes. Gary Karkofsky a.k.a Merciless: The Supervillain without Mercy has come to one inescapable conclusion: being a supervillain sucks.

Unfortunately, the world needs a villain more than ever as the time-bending god Entropicus has begun a tournament across the Multiverse to determine who will wield the power of the Primals and rule the universe forever. Gary certainly couldn’t say NO, could he? Guest starring Agent G, Cassius Mass, and Jane Doe! Plus appearances by a huge number of other characters you may recognize like Cal Stringel and the Shadow Master!

See the same situation with Esoterrorism but benefiting from the help of Amber Cove! What is the world’s only decent undead abomination turned demigod doing to make his tyrannical Good-ruled world a better place? Well, it turns out trying to take over the world’s largest city as the start of an invasion!

He has reasons, though!

Check them out as they come out!

One thought on “Upcoming Books”